The color change stones fascinate you, you are literally captivated by this phenomenon so fabulous and so rare in precious stones. Since you learned about it, you never stop dreaming of a jewel surmounted by a magnificent gem with a changing color. Are you a collector of rare gemstones and are you looking for a piece that will fit perfectly into your collection? You are a jeweler anxious to offer your sublime creations only with exceptional stones or having subtle particularities that will amaze your customers, gems which, overcoming your mounts will be synonymous with excellence, which goes from match your brand image. This stone, we have it, it is the very rare Malaya Garnet color change. A variety of Garnet changes color and has a unique color

A variety of Garnet changes color and has a unique color

This form of Malaya Garnet with color change was discovered in 1978 in Africa. It is composed of molecules of Pyrope Garnet and Spessartite Garnet and as a bonus has a color change. For a long time we did not know how to classify the Malay Garnet whose color is totally different from other known Garnets. Also because we didn't know how to name it or how to classify it, locally in the Kiswahili language, we called it Malaia or Malaya, which literally means rejected or banned. Also, given its real official designation (somewhat extended) which is: Pyro-Spessartite or Pyrope-Spessartite or Pyrospessartite garnet, the original designation became the official trade name for this Garnet. In standard samples of Garnet Malaya we may or may not observe a slight ability to change color depending on the type of light, or the time of day when the stone can be observed. This phenomenon is partly due to traces or impurities of chromium in its composition. On the other hand, clearly identified specimens, such as Garnet Malaya change color, have the option of changing color depending on the type of light source. The intensity of the color change phenomenon is truly spectacular, much more than the change that we can hope to observe in Alexandrite. Most Malaya garnets with changing color therefore have the following colors under normal conditions of daylight observation: pink, pink-purple, beige-pink, salmon pink (copper), dark magenta, orange-magenta. They can become, when viewed in incandescent light: pink, pink-orange to red, red-pink, light purple.

To date, there are only two deposits in the world, the historical deposit of its discovery in the Umba valley (Tanzania) and that of Madagascar (Ampanihy). Since there are only two deposits in the world from which an extremely small number of samples showing the color change are extracted and the stones are always small, the prices are very high on the market and demand far exceeds supply. It is therefore a highly coveted gem, sought after and essentially intended for luxury jewelry and collectors. 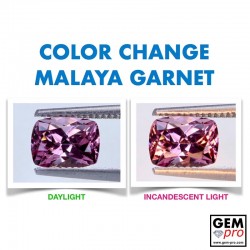 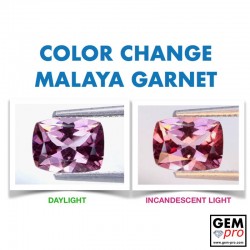 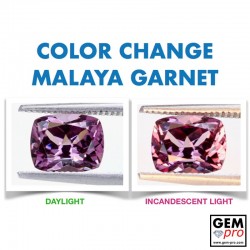