Do you dream of acquiring a green gemstone? The Emerald is a mythical gemstone, one of the most expensive, the most sold and sought after of the varieties of Beryl. But do you know the green beryls also called vanadium beryls? The Emerald is a green Beryl but its chemical characteristics are very precise. If the element Chromium is absent from the composition of the stone, this one cannot bear the name of Emerald. As decided by the Gem-A, a British gemmology authority recognized worldwide, while its counterpart of the G.I.A (Gemmological Association of America) does not take this element into account and declares that any green beryl can be called Emerald.

This strain has made and will certainly continue to spread a lot of ink, it is the subject of an old open debate to date. However, prudence in gemology means that the gemstone dealers decided to adopt the precautionary principle concerning these stones, hence the name "Beryl vanadium". This variety designates all pale green stones with or without shimmering or asterism, which are not considered to be emerald as containing almost exclusively Vanadium, while the Emerald contains Vanadium, iron and Chromium. For half a century, two very distinct currents within international gemology have clashed on this point. For some, comforted by the position of the GIA (Gemmological Institute of America) which grants emerald status to beryl containing Vanadium with or without Chromium and Iron. While the others claim that Chromium is the sinequanon condition for a green beryl to be called Emerald and are supported by the position of The Gemmological Association of Great Britain (Gem-A). This confrontation considerably weakened the value of green beryls on the international market and created big commercial disappointments during the discovery of large deposits of Beryl Vanadium in Brazil which produced large transparent stones, in contrast to the emerald, extremely rare in large pieces . What can be all the more annoying, because the green beryls which do not contain Chromium have markedly fewer inclusions than the emeralds which are almost always with inclusions. Vanadium beryls are native to Madagascar, South Africa, Brazil, Russia, Pakistan, Nigeria.

Discover our other fabulous varieties of Beryl:

We strongly suggest that you consult the following categories: 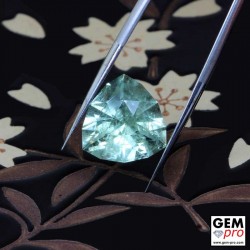