Are you an inveterate garnet collector? You are an individual and wish to create a jewel with a rare Garnet but neither red nor pink! A Garnet which would be between green and gold and which is not very common in jewelry. A precious stone, subtle, in your image, which would arouse the curiosity of laymen and the admiration of aficionados. Look no further, we have this Garnet and we are pleased to present it to you, it is the Topazolite Garnet.

Garnet Topazolite is a trade name. To be exact, its scientific name is Garnet Andradite. It is actually the beige to yellow shape of this Garnet. A multitude of shades and color combinations range between these two colors: yellow, yellow-brown, dark yellow, yellow-green, caramel. The etymology of the name "Topazolite" comes from its resemblance to the Topaz (yellow) in terms of color and transparency. It is not an extremely rare Garnet, strictly speaking, because there are a number of deposits in the world. However, it remains a rare gem and coveted in its best quality. The stones from the deposits: crystals, rhombododecahedra, hexaoctahedra, are generally opaque to weakly translucent. The few very transparent crystals usable in luxury jewelry are always very small. This stone will be of particular interest to collectors and jewelers who want a stone with a superb shine. Iron and titanium are essentially the chemical agents responsible for the coloring of the gem. Malagasy stones are characterized by a very low (almost undetectable) proportion of chromium and vanadium.

A single deposit in Madagascar

The first mention of green Andradite garnets in Madagascar was made by Lacroix in 1922 in the north of the island, without our knowing whether it was the Demantoid Garnet or the Topazolite Garnet of which he was referring. In 1997, superb Tsavorite Grossular Garnets were discovered in Gogogogo as well as Itrafo. Garnet Topazolite was discovered in the presence of Garnet Demantoid in 2006 and 2008 in the north of Madagascar in Antetezambato (Ambanja). It is estimated that at the peak of activity at this mine, 20 kg of stones were extracted per week (2009), the vast majority of which were opaque and very slightly translucent stones, totally unsuitable for jewelry. The total production of this deposit is estimated to be in the order of a few hundred kg of rough stones, including only a few kilos of stones estimated to be usable in jewelry. There are no raw samples of the finest quality, combining beautiful clarity and beautiful color of more than 2.5 g. Cut stones of 4 carats are extremely rare and those of 6 carats are exceptional pieces of museum. 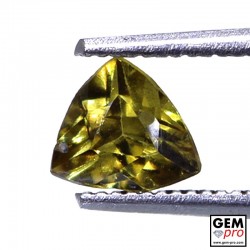 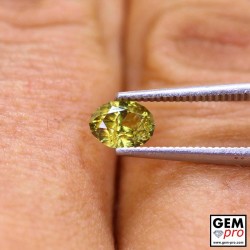