Opals are such special and spectacular gemstones that they are unlike any other known stone. You are literally a fan of it and among all the forms available on the market, so-called precious or noble Opals are without a doubt, your favorite. Indeed the play of colors which they have is an eternal delight. You could spend hours contemplating them, discovering them, so varied are their "lights", both in terms of the colors presented, as in their appearance, their intensity. You are a jeweler and offer original, contemporary jewelry, featuring still little known stones that are of interest to the layman and the delight of aficionados. Are you a creator, designer, jeweler, loving challenges and not looking for ease or the previously seen? The Ethiopian Opals correspond to you completely and you are fond of them! Look no further, we offer welo Opals expertly selected for their intrinsic quality, their colors, their iridescence, their shapes. You will find in our shop both welo opals cut in cabochons, but also rare faceted cut stones.

The end of Australian supremacy!

In precious opals, Australia has dominated the world market for centuries. Indeed it was the only and largest producer in the world of this type of stones. Because of its great rarity, prices reached peaks, supply being much higher than demand. In the early 1990s, a deposit of so-called noble or precious Opals was discovered in northwestern Ethiopia, in the Semien Wollo region of Mezezo. In 1997, 10 kg of rough stones were extracted but it was not really until 2008 that a very significant exploitation of this stone was put in place with several tonnes extracted in 2011. Despite the fact that these quantities seem substantial, you should know that only 5% of the samples extracted can be exploited and 1% will have the qualities necessary to produce stones which could be intended for jewelry.

A new provenance, stones that can exceed in quality and quantity their Australian counterparts

Of volcanic origin, the deposits are mixed with ash, in which the Opals are discovered in the form of nodules. Note that unlike precious Australian Opals, Ethiopian Opals can be treated with faceted stones. Another peculiarity, unlike the precious Australian Opals, there is no official grading system for this type of Opals (shade / shine / color / patterns). However, Ethiopian Opals are classified according to their type of pattern. The most sought after motif is the one called "honeycomb", forming small colored cavities resembling the characteristic honeycombs of hives. Another peculiarity of Ethiopian Opals is that the play of colors can have a 3-dimensional appearance, which is a rare phenomenon in Opals as a whole. What also characterizes this type of Opals is their very high shine. Treatments, summaries and other improvements at Welo Opal Ethiopian Opals can be treated by smoking, which gives them a black / smoky appearance which considerably enhances the appearance of their lights. Indeed the colors and the brilliance of the play of colors is even more present when they appear on a background of black / dark stone. It should be noted that they can also be tinted (as a general rule by pink or purple dyes). Attention the Ethiopian Opal is also imitated by syntheses which are more and more widespread on the market. Mistrust is a must when you are in the presence of a large, inexpensive stone. Always buy with a professional recognized as such and having a storefront. shopping for stones on the sly and good deals do not mix well.

An opal with a hydrophane nature

Opal is a hydrated silicon dioxide which has the distinction of containing a significant proportion of water in its composition (on average from 5 to 10% or 20%). It is a so-called amorphous gem that has almost no crystal structure. The majority of Ethiopian Opals are said to be hydrophanes, they are able to capture moisture in their environment. If you dip it in water, or if the latter is in contact with water, it will absorb some of this water and will have a cloudy, dull, slightly cloudy appearance, or will temporarily lose some or all of its water. lights (iridescence) and its colors. In this case, there is nothing else to do but wait for it to dry for a few days, so that it can regain its original colors and lights. It is a stone which fears dehydration, because of its large proportion of water in its composition as indicated above. Also take care that it does not dehydrate too much, in order to avoid cracks and fissures, see the total disintegration of the gem in case of extreme dehydration. More tips on caring for Ethiopian Opals can be found on our blog and in the article "Welo Opal Care Guide". To conclude, do not forget that Opal is a fragile stone, relatively soft and of low hardness. Shocks, scratches, are to be avoided and if you want to keep it for a long time, avoid if you can, wear it as a jewel when you are doing work, or playing sports… Idem, it is strongly advised not to wash your hands or shower while wearing a piece of opal jewelry.

Discover our other categories of opal: 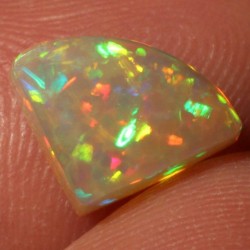 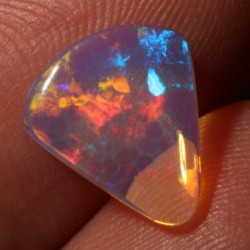 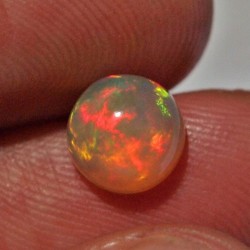 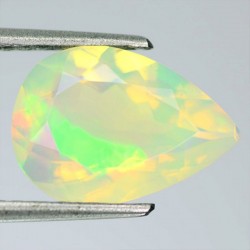