A stone with many qualities

Kunzite is a variety of transparent Spodumene, pink, lilac, pale pink, pale magenta, purple tending to pink, purple, colorless and sometimes shimmering. It is a stone which displays a pleochroism marked with the most beautiful color visible in the length of the crystal. It is mainly native to Afghanistan, Brazil, Myanmar (Burma), the United States (California) and Madagascar. The typical color of the stone is due to the traces and impurities of Manganese. It was discovered in 1902 in the United States (California) by H. Charles Baskerville and named in honor of the mineralogist, gemologist, collector / prospector, author, jeweler and expert in colored stones George F. Kunz who was notably vice -president of the New York jeweler Tiffany and Co. Kunzite is a frequently irradiated and heated stone, in order to enhance the color of the stone. Be careful, because some stones that have undergone such treatments can lose their color (see becoming colorless) following prolonged exposure to heat and sunlight. Large stones are highly sought after in jewelry and by collectors, in fact small stones often appear very very clear and do not have this magnificent pink / purple color which is clearly visible in large stones. The largest Kunzite ever cut is a faceted, heart-shaped stone, 880 carats, originally from Brazil and on display at the Smithsonian Institute. Kunzite like the other varieties of spodumene is a significant source of Lithium. In 1996, a 47-carat Kunzite ring that belonged to Jacqueline Kennedy Onassis was sold at $ 410,000 at auction at Sotheby’s. For the record, this ring had been acquired by President JF Kennedy, in the context of a gift he wanted to make to his wife, but which he unfortunately never could offer him in his lifetime, having been murdered.

BUY GEMSTONES: BY COLOR OR BY SHAPE 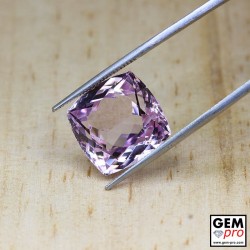