Are you looking for a green gemstone with a very special color, slightly yellow in color, very shiny, lively and very clean? A gem that some meteorites may contain? A stone of a green color, which is clearly distinguished from all other gems of this same color (emeralds, green tourmalines ...), a stone both sought by the collector and the jeweler. A precious stone with the most beautiful effect set in jewelry, whether as a ring, bracelet, medallion, pendant or earrings. Look no further, we have the stone that meets your expectations. We offer a selection of magnificent natural Peridots, which will delight both the demanding collector and the jeweler looking for a stone which will undoubtedly enhance the quality of the goldsmith's work on the frames produced.

Peridot is the trade name for a variety of green Olivine, which can also be called Forsterite or Chrysolite. It is a silicate gem, rich in magnesium and containing iron. It has been used since time immemorial as can be seen from its various ancestral names such as "Faridat" in Arabic meaning "gem", from Latin "Paederos", from the old French "Peritot" and from the old English "peridod", "peritot "," Pelidod "or" pilidod ". Its precise etymological origin remains a mystery to this day. It was said to be Cleopatra's favorite stone. It is also a stone cited in the Old Testament under the Hebrew name "Pitdah", it is the stone of the tenth tribe of Israel: Nephtali. The crusaders brought it back from their crusades thinking it was Emerald. Since that time it has been part of the ornaments of many medieval churches in Central Europe such as Cologne Cathedral. It is also said that Napoleon offered a sumptuous copy to Josephine as a token of his eternal love. Peridot is a relatively solid stone but does not like the stresses associated with sudden temperature changes. It is particularly sensitive to acids, ultrasound and does not appreciate great pressures. It must be crimped by an experienced crimper. We advise not to wear it as part of the sport or as part of household chores, because it is a stone that can be scratched easily. It is a stone which has the particularity of being only one color (olive green). Iron is the element responsible for its coloring, the lower the percentage of iron, the lighter its color. Conversely, a high iron content will produce stones of a deep green color going up to dark green-brownish. The most sought-after and coveted color is the intense green color. It is a sought after stone in jewelry, good hardness (6.5 to 7 on the Mohs scale) and always of the most beautiful effect. Stones larger than 3/4 carats are particularly desirable, especially if they are very clean, with little or no inclusions. It is a gem that has not been the subject of any known treatment to date, but which can be confused with Kornerupine, Green Beryl, Diopside, Green Tourmaline, Chrysoberyl to name a few. The deposits producing gem quality samples for jewelry are Pakistan, Myanmar, China, the United States, Egypt. It is also found present in certain Pallasite type meteorites. It can contain inclusions, which can give it, depending on taste, an additional aesthetic interest, like stones from Pakistan which contain Ludwigite inclusions. The largest known facet cut Peridot is that of 310 carats exhibited at the Smithsonian Institute in Washington. Peridot is the birthstone for the natives of August.

Take a look at the following categories: 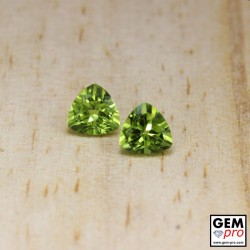