You like orange stones, but you are looking for a stone of this color with a glitter effect. In addition, you prefer cabochons to faceted stones for jewelry. You want a stone with a warm color, reminiscent of the beautiful star, a sunny stone, which will sparkle with a thousand lights and this even more when it is observed in full sun, which may seem quite normal, since this stone is calls Sun Stone. We offer a magnificent choice of selected and handpicked stones, from a very rare source. We invite you to discover our magnificent Sun Stones, which will undoubtedly delight you with their beauty!

The Sunstone is a feldspar (Microcline, Oligoclase, more rarely Labradorite), sometimes called Héliolite, described by the French mineralogist Jean-Claude Delamétherie in 1801. It has a glittery sparkle on an orange, brown, red-orange background (effect schiller) characteristic, reminiscent of the sun and called adventurescence. The cause of this optical effect is related to inclusions of Hematite and / or Goethite and / or the presence of copper. It is precisely in full sun that this phenomenon is most marked and visible, which has earned it this designation. Generally, all feldspars with this effect can be called Sunstone. It is a stone essentially cut in cabochon and more rarely faceted, which despite its low hardness, still enjoys great popularity in jewelry. However beware of imitations, a synthetic stone trying to resemble it from afar has been in circulation for a very long time, called Synthetic Sunstone, it is a mixture of silica containing copper particles, treated at very high temperature and suddenly cooled in order to obtain a precipitation of the copper molecules which then find themselves frozen in the mass. The real Sunstone is from Australia, Canada, Mozambique, Norway, Russia, the United States. Stones from Madagascar are extremely rare in nature and almost impossible to find on the world market and we are one of the few companies to have the privilege of being able to offer them to you. 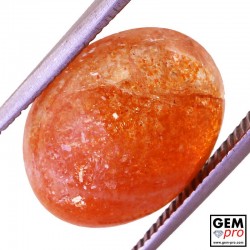 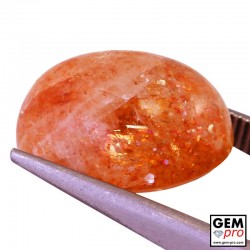 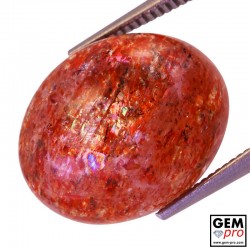