Are you looking for a relatively brilliant and relatively rare gem? You want a golden colored gem to be set in jewelry, which would be neither a yellow / golden sapphire, nor a Chrysoberyl, nor a yellow Tourmaline, nor a Scapolite, nor a Sphene? A 100% natural stone, untreated, meticulously selected, including some original specimens by their dimensions or their inclusions. A little-known stone that deserves more attention! Danburite is a gem that is still relatively unknown as a precious stone, but its popularity continues to grow day by day. Apart from its low availability, Danburite has many qualities for lapidaries and jewelers because it is a mineral species which has the advantage of producing prismatic crystals of excellent clarity, relatively easy to cut and which give magnificent and attractive very shiny gems with various colors.

This relatively rare gem, is mainly composed of calcium, boron and silica. It is an uncommon mineral, primarily pneumatolytic in origin and commonly found in pegmatites and greisens. This mineral can be confused with a number of mineral species such as Topaz, which is clearly distinguished by its hardness, but also by Montebrasite, Apatite or Brazilianite… The transparent gem forms of Danburite are intended to be cut for jewelry and jewelry and can be of very varied colors: white, colorless, yellow, orange to brown, pink.

Danburite was first discovered in the 17th century in the state of Connecticut, in the city of Danbury (Fairfield County) on the east coast of the United States. It was described by the mineralogist Charles Upham Shepard in 1839. Today it is also found in Mexico, Japan, Myanmar (Burma), Madagascar, Switzerland, the Czech Republic, Russia and Tanzania.

To read on our blog (in french) : La Danburite 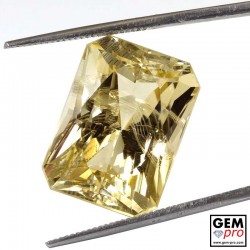